The cenotes have been whispered in mythical circles for thousands of years as a sacred place of sacrificial offering. In more recent times, they have been spoken of in diving circles as the place to go for some amazing and extreme diving. But, what is a cenote exactly, how were they formed, and why is diving in the cenotes becoming so popular?

What is a Cenote?

A cenote is a limestone well that is created when the roof of an underwater cavern collapses. This results in a sinkhole that fills up with rainwater or water flowing through underground rivers. Water will permanently flow through a cenote.

Read More: The Difference between a Cavern and a Cave

The word Cenote, pronounced as ‘seh-no-tay,’ is a Spanish version of the Yucatec Maya word “D’zonot” or “Ts’onot” which means ‘well.’ Cenotes generally refer to these limestone caverns found in Mexico. However, the word has recently moved into the English lexicon to refer to sinkholes and permanent wells from around the world, with sinkholes in South Australia now known as cenotes too!

The vast majority of cenotes are located along the Yucatan Peninsula in Mexico, and extend to Belize and Guatemala. The land here is very porous and made of soft limestone soil that easily falls apart with rain and underground flowing rivers. This has created an underwater maze of over 6,000 cenotes which has been found to be over 60 million years old.

Cenotes come in many different versions and sizes. The most common versions are the following;

A cenote will start off as a cavern with a roof overhead. Water will usually come from an underground river or slowly trickling through the roof of the ground above, and/or through an underground river. These cavern cenotes are dark and have no exposure to the sunlight and fresh air.

When part of the roof collapses overhead, the cavern will turn into a young or semi-open cenote. Rainwater will continue filling this ‘well.’ Because of the partial sunlight exposure, you will find more flora and fauna in these cenotes.

A mature cenote or open cenote is the oldest version of a cenote. This occurs when the roof above completely collapses exposing the well below. Open cenotes allow light into the cavern, creating a bright and colorful ecosystem. You will usually find some amazing flowers and plants growing along the walls thanks to the sunlight. This brings a lot of birds and butterflies too. One of the more famous open cenotes is the Sacred Cenote of Chichén Itzá. Offerings and pre-Hispanic articles were found inside here.

Some cenotes can be very large in diameter. These cenotes are easily accessible with stairs and amenities built-in, allowing large crowds of people to enter and enjoy the giant dome, cathedral-like cenote.

Other cenotes can be absolutely tiny in size and have limited exposure to the open air. These openings are hidden within the tree-roots and can prove to be a death-trap to anything or anyone who accidentally falls in.

The Significance of Cenotes in History

The cenotes were used as a water source for the ancient Mayan civilizations. They believed that the rain god, Chaak, resided in the cenotes and caves below the surface. The cenotes were the only source of fresh water in Mexico’s parched Yucatan state. With this gift of water came nature, plants, and animals, which sustained this civilization. Their reliance on the cenotes was so tied into their cosmology that they even practiced human sacrifice in these mystical bodies of water.

“For Mayans, cenotes were the entrance to the underworld. The Maya conceived of the cosmos as having three basic layers: heavens, earth, and underworld,” he explains. “The underworld was very important — it was considered the origin of life, and if the Mayans didn’t keep a good balance between this layer of the universe and their own it could mean drought, famine or sickness. So they knew they had to keep the peace with their deities of the underworld and this is why sometimes they made offerings.”

GUILLERMO DE ANDA, AN UNDERWATER ARCHAEOLOGIST WHO IS LEADING THE TEAM FROM THE GREAT MAYAN AQUIFER PROJECT.

Even today, Maya farmers still appeal to to Chaak for the gift of water and rain for their crops.

Diving and Swimming in a Cenote

The water in a cenote is generally very clear with high visibility. This is due to the rainwater filtering slowly through the roof of the cavern trapping suspended particles. Due to this filtered and clear water, diving and swimming in a cenote is very popular. It is also highly popular for amateur and professional photographers!

As mentioned previously, diving in the cenotes is very popular with cave and cavern divers who wish to explore the intricate and exciting underground water network. It is highly risky though, with many lives lost in the process. The pathways in the cenotes can be cramped and tight. It is consistently dark with low-light, and there is rarely a clear and easy path to the surface of the water in emergencies. For this reason, diving in the cenotes will always need to be supervised by experts.

Have you dived in the cenotes or a sinkhole anywhere in the world? How was the experience? Let us know in the comments below! 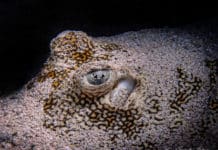