DOWN TO SCUBA
Home DIVE Scuba Diving after Perforated Eardrum Scuba diving involves equalizing the dead air space of a middle ear, to match the atmospheric pressure of water. This means both spaces are ‘equal’ and you won’t feel pain as you go under more pressure from the water. If you have a perforated eardrum, then water can enter the damaged eardrum, and your middle ear is no longer a dead air space.

This is not ideal for scuba diving as while you won’t need to equalize your ears anymore, it can cause lasting damage to your ears, your sense of balance, and your hearing. You will most likely get an ear infection that can be incredibly painful.

Find out the Different Ways to Equalize your Ears and why the Toynbee Maneuver is one of the easiest and safest methods to equalize your ears.

Signs and Symptoms of a Perforated Eardrum

What is a Perforated Eardrum

A perforated eardrum or ruptured eardrum is when there is a hole or tear in the thin tissue that separates your ear canal from your middle ear.

The eardrum does two important things for your ears. The thin skin senses vibrating sound waves and converts vibrations into nerve impulses that tells your brain that there is a sound. This allows you to hear.

How do you get a Perforated Eardrum

Common causes of a perforated eardrum include:

How to Avoid a Damaged Eardrum

When you are scuba diving or freediving, the most common way of damaging your eardrum is by diving with congestion and forcefully equalizing.

To avoid this, you should not dive when you are sick or congested.

However, if you are diving with a bit of congestion, then descend slowly and make sure that you are equalizing early and often. Try to use a descent line or a mooring line to hold onto so you can slowly go down. Let your buddies or dive guide know in advance that you may need more time when descending and communicate with them to signal if you are okay.

Remember to never push it. If you are having trouble equalizing then it is better to abort and end the dive, rather than push it, and damage your ear, thus stopping you from diving for weeks or even months.

Risks Associated with a Perforated Eardrum

Having a severe ear infection could also cause hearing loss in the long term.

How to Fix a Perforated Eardrum

Time will usually heal a damaged eardrum. The usual recommendation is 6 weeks, but you should check with your doctor who can refer you to an ENT (ear nose throat) specialist. They will be able to see inside of your ear with a camera and light to ensure the eardrum has completely healed up.

You should be keeping the ear dry and clean. For example; no swimming, snorkeling or other water activities. You may also need to keep it covered during your shower.

The ENT may recommend antibiotics or eardrops to combat existing infections. If you have pain from the perforated eardrum, the ENT may also recommend over the counter pain-killers.

In severe cases, the ENT may suggest surgery on your eardrum. This can involve placing a ‘patch’ over the eardrum to assist in healing. The doctor may also attach a piece of your own tissue to rebuild the damaged eardrum.

Can you Dive after a Perforated Eardrum

Opinions can differ on this matter. Some ENTs will err on the side of caution and suggest that you never dive again, but this would be devastating to a diver. It is best to go to an ENT who specializes in scuba diving as they will know what to check for and give you the all-clear.

As a scuba instructor, I have had many colleagues who have had perforated eardrums, and after a period of time (6 weeks to 3 months), they have been allowed to go scuba diving again. Please check with your doctor/ENT before getting into the water. 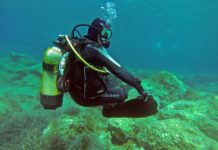