Mark Caney is truly a leading expert in the diving industries. Some career highlights include being a Vice President of Training & Customer Services with PADI, three times President of the European Underwater Federation, twice President of the Rebreather Training Council, and he continues to hold senior positions in the World Recreational Scuba Training Council. He is now the Industry Relations & Training Executive for PADI Worldwide, Chairman of Project AWARE for Europe, Middle East Africa, and author of Dolphin Way: The Rise of the Guardians.

What sparked the interest in diving?

When I was about eight years old, I came across a cattle drinking trough while walking in the fields and saw things moving under the water. I had been avidly watching Jacques Cousteau on the television in those days, so I ran home and found two empty jamjars. I then went back to the cattle trough, pressed them against my eyes, and lowered them into the water. I realised that there was a whole living world under the water, and made up my mind then that I would go diving one day.

When I was eighteen, I joined the British army and was sent to Northern Ireland. While I was there, I joined a local dive club and learned to dive. Later, I was posted to Cyprus, and I subsequently left the military and started a dive centre in Pafos, Cyprus. I’ve been working full-time in the diving industry since then.

What are some of your greatest achievements in the diving industries?

My career path has resulted in me acting as a representative for PADI on many pan-industry bodies. This has given me the privilege of helping to shape the creation of many diving industry safety standards, such as the ISO Recreational Diving Standards.

As I have been the chairman of the Project AWARE Foundation (EMEA), I’ve also been lucky enough to help shape the direction that we take to try to do the most good for the underwater environment.

Most recently, I was pleased to complete a project that has taken several years to complete, the creation of a new diver medical screening system. I chaired the select group of international diving medicine specialists who developed the new system that finally came out a few months ago. The previous system was used to screen tens of millions of divers, and I am sure this one will too.

What was your most memorable diving experience?

I’d have to say my most memorable positive experience while being underwater was while just snorkeling, and you may not be surprised to hear it was with a dolphin. I had heard of a lone dolphin that had been seen regularly in a particular bay in the Red Sea. I drove there overland with some friends but it was a hard place to reach, so by the time we arrived, it was late at night.

It was summertime though; the sea was calm, and a full moon was rising over the water. So, I went out in snorkeling gear, and there she was. At first, she was wary and circled around me, but then she became more confident and eventually came up to touch me. After a while, she let me stroke her and hold her; she obviously liked it and didn’t seem to want me to leave. We spent hours playing together that night, and with the moon shining through the calm sea onto the white sandy seabed, it was easy to see. I looked into the dolphin’s eyes that night and clearly saw another intelligence looking back at me. We could not talk, but there was a mutual recognition of another sentient being and a shared affection.

Can you tell us about being a Marine Mammal Medic?

I am a British Divers Marine Life Rescue Marine Mammal Medic. BDMLR is an organization dedicated to the rescue and well-being of all marine animals in distress around the UK. I wanted to be able to help and to learn more about cetaceans.

The UK organization, BDMLR, has a network of trained volunteers who are located all around the coast. If a stranding is reported, a central coordinator sends a message out to all the volunteers in that area and if they are able to respond, they reply and get directions. I have been involved in this way myself.

Most commonly, it will be a single seal, but sometimes it can be a dolphin, or even a whale or multiple strandings. Sometimes the animal sadly is already dead or too ill to be saved, but many have been successfully rescued. I know that similar schemes are operated in other countries, for example, Australia and the USA.

Can you tell us more about Dolphin Way, your novel set in the world of dolphins?

I have been fascinated by the underwater world since I was a child. I’ve worked in the diving industry for over forty years and my favourite hobby is sailing, so I’ve been lucky enough to spend a lot of time around dolphins. It always seemed to me that they have a fairly utopian life; they spend all day playing, eating, and making love. They have an intelligence that probably rivals our own, but they don’t use it to manipulate their environment as we do.

As a result, they have a way of life that could have gone on forever; it’s truly sustainable. But then I learned about all the threats they now have from man, and it made me think. If you had a near-perfect society like that and they started to find that they had factors like overfishing, military sonar, and pollution impacting them – what would happen? What would they make of it? Because these things are happening right now. That gave me the initial idea of writing Dolphin Way – Rise of the Guardians.

Read Part 2 of Mark Caney’s Interview and his novel, Dolphin Way – Rise of the Guardians 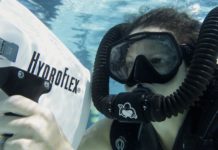